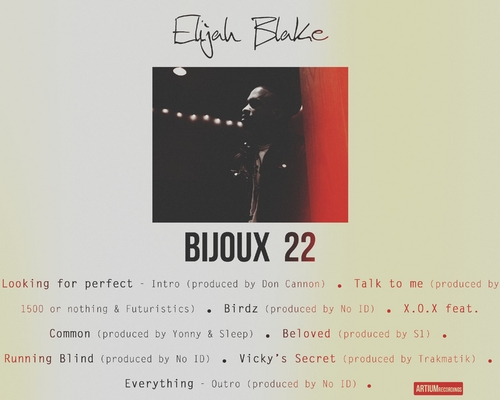 Today, I wanted to share one of my old favorite EPs that still continues to be on constant rotation. Bijoux 22, by Elijah Blake has found a permanent place in my heart for spawning one of my favorite songs of all time. I just wish people knew about it. Since I have a platform, why not share?

It was 2012 and Jay Z was trying to build his newly minted Roc Nation banner for artists. He was picking a lot of budding singer/songwriter combos to mixed results. One of my favorites was Elijah Blake. Elijah Blake, writer of Usher’s Climax and hits for others artists, showcases amazing range and writing capabilities throughout Bijoux 22. Specifically, one of my favorite songs of all time had to be the 2 minute intro, Looking for Perfect.

Blake takes Justice’s “TTHHEE PPAARRTTYY” sample, that has seen plenty rotation from Three 6 Mafia and many others, and lets it serve as a backdrop to his soul touching vocals. The lyrics are simple, sweet, and encapsulate the warmth of being caught off guard by unsuspected perfection.

Talk to Me has a level of catchiness and repetition that I’m surprised didn’t take off as much as it should for radio play. It also shows his now signature falsetto and control floating in and out of lyrical exercises. Birdz is slightly out of place on the EP but still a solid listen. I just personally have an issue with phone conversations and arguments being included on albums but it makes sense here. Next is the first and only single off the Bijoux 22, X.O.X. was an enjoyable affair with Common dropping a solid performance from top to bottom.

Beloved is another song that touched me as it showed the vulnerability in his songwriting capabilities. I is an honest and painful song reflecting, no, beseeching a lost loved one. I love the Elijah the most as it really uses the power of his voice best. He’s touched on this similar sound and imagery in a newer song called 6/Fallen. They are not on this EP but I still wanted to share the powerful imagery.

The mixtape is rounded out with sensual songs such as Running Blind and Vicky’s Secret. It is further closed out with Everything, an guitar led cover of Lighthouse’s single from 2000. Elijah truly hits all the right notes at the end, letting people hear the emotion and vulnerability before drifting off.

I originally stumbled upon Elijah Blake trying to have a Frank Ocean itch scratched. He definitely surprised me and I still keep up with his music today. I would definitely say check out Bijoux 22 if you have some time. It’s such a nice surprise.

I hope you guys enjoy. I might do occasional Old Vibes on Fridays intermingled with the newer music I cover. What do you think about Elijah? You can check out some of his newer stuff at elijahblake.com